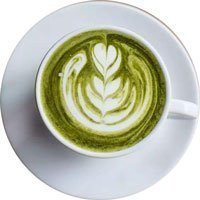 In traditional green tea, the tea leaves are steeped in hot water before being discarded. With matcha, the tea is ground into a powder and mixed with hot water. As a result, the leaves are consumed. Traditionally, a teaspoon of matcha powder is mixed with one-third of a hot water cup (heated to less than a boil).

Matcha may have even more health benefits than other antioxidant-rich teas because, unlike traditional tea, the leaves are physically consumed instead of just steeped.

Matcha is a rich source of antioxidants and polyphenols. It is high in vitamin C, fiber, and chlorophyll.

One cup of matcha tea has the antioxidant power equivalent to 10 cups of brewed green tea. Matcha has approximately 15 times the amount of antioxidants of pomegranates or blueberries.

L-Theanine is an amino acid found in matcha that promotes a state of relaxation and well-being. Stress can induce beta waves in the brain.

L-Theanine is common in all tea, but matcha contains five times the amount of L-Theanine found in black and green teas. L-Theanine may help memory and learning ability due to its ability to reduce distracting information, improving performance on cognitive tasks.

The healthy antioxidant activity of tea polyphenols has also been attributed to cancer prevention, although the exact mechanism is not known.

According to the National Cancer Institute, the polyphenols in tea have decreased tumor growth in laboratory studies. In countries where green tea consumption is high, cancer rates tend to be lower, although it is impossible to know whether this is because of green tea consumption or other lifestyle factors.

Matcha healthy Benefits 2: Studies concerning the relationship between green tea and diabetes have been inconsistent. Some have shown a lower risk of developing type 2 diabetes for green tea drinkers than those who consumed no tea. In contrast, other studies have found no association between tea consumption and diabetes.

Matcha healthy Benefits 3: A 2006 study published in JAMA concluded that green tea consumption is associated with reduced mortality due to all causes, including cardiovascular disease. The study followed over 40,000 Japanese participants between the ages of 40 and 79 for 11 years, starting in 1994.

The participants who drank at least 5 cups of green tea per day had a significantly lower risk of dying (especially from cardiovascular disease) than those who drank less than one cup of tea per day.

Another study found that consuming 10 cups of green tea per day can lower total cholesterol. However, drinking 4 cups or less had no effect on cholesterol levels.

Although this has not been studied explicitly with matcha, because matcha is essentially very potent green tea, it could be expected that this effect occurs with matcha consumption in much lower quantities.

How To Store Matcha And Keep It Fresh?