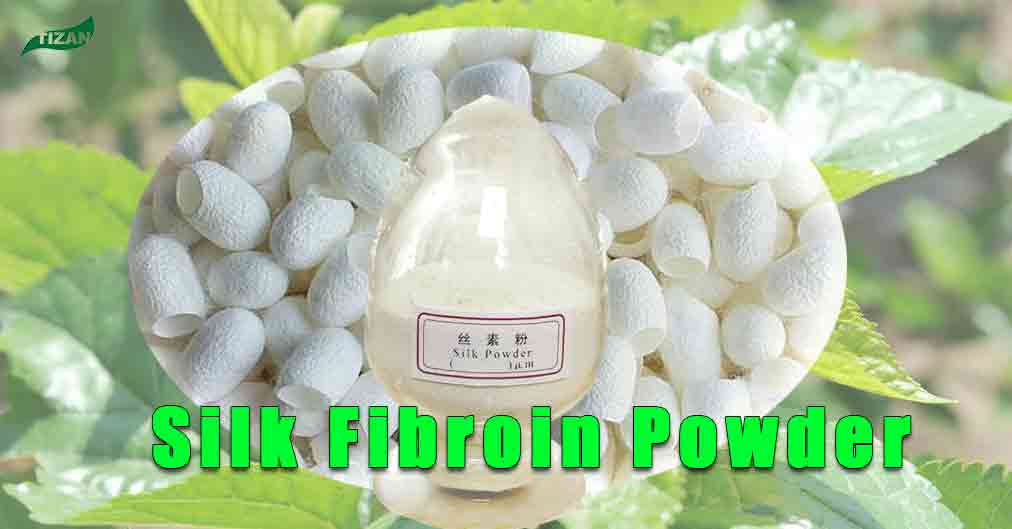 TIZAN Silk Fibroin Powder is a kind of macromolecular silk fibroin in powder form, which is made from the silk fibroin degummed under high pressure, requires special craft processing and smash through physical methods. Its molecular weight of is about 250000. It is tasteless, odorless, slightly soluble in water and insoluble in alcohol ether.

The fibroin protein powder consists of layers of antiparallel beta sheets. Its primary structure mainly consists of the recurrent amino acid sequence (Gly-Ser-Gly-Ala-Gly-Ala)n. The high glycine (and, to a lesser extent, alanine) content allows for tight packing of the sheets, which contributes to silk’s rigid structure and tensile strength. A combination of stiffness and toughness make it a material with applications in several areas, including biomedicine and textile manufacture.

Fibroin powder is known to arrange itself in three structures, called silk I, II, and III. Silk I is the natural form of fibroin, as emitted from the Bombyx mori silk glands. Silk II refers to the arrangement of fibroin molecules in spun silk, which has greater strength and is often used in various commercial applications. Silk III is a newly discovered structure of fibroin. Silk III is formed principally in solutions of fibroin at an interface (i.e. air-water interface, water-oil interface, etc.).

Silk is a natural protein fiber, some forms of which can be woven into textiles. The protein fiber of silk is composed mainly of fibroin and is produced by certain insect larvae to form cocoons. The best-known silk is obtained from the cocoons of the larvae of the mulberry silkworm Bombyx mori reared in captivity (sericulture). The shimmering appearance of silk is due to the triangular prism-like structure of the silk fibre, which allows silk cloth to refract incoming light at different angles, thus producing different colors.

Natural Silk is the Oldest Pride of China

The earliest example of silk fabric has been found in a neolithic site in Henan, and is dating back 8,500 years. Silk fabric from 3630 BC was used as wrapping the body of a child from a Yangshao culture site in Qingtaicun at Xingyang, Henan.

Legend gives credit for developing silk to a Chinese empress, Leizu (Hsi-Ling-Shih, Lei-Tzu). Silks were originally reserved for the Emperors of China for their own use and gifts to others, but spread gradually through Chinese culture and trade both geographically and socially, and then to many regions of Asia. Because of its texture and lustre, silk rapidly became a popular luxury fabric in the many areas accessible to Chinese merchants. Silk was in great demand, and became a staple of pre-industrial international trade. In July 2007, archaeologists discovered intricately woven and dyed silk textiles in a tomb in Jiangxi province, dated to the Eastern Zhou Dynasty roughly 2,500 years ago. Although historians have suspected a long history of a formative textile industry in ancient China, this find of silk textiles employing “complicated techniques” of weaving and dyeing provides direct evidence for silks dating before the Mawangdui-discovery and other silks dating to the Han Dynasty (202 BC-220 AD).

UNESCO designated the Silk Road as a World Heritage Site, and with the development of trade on the Silk Road, most people know the natural silk come from China, fostered and enhanced in Europe and America. It is even regarded as valuable treasure by Japanese in modern times.

Silk as fiber nearest to human skin in the world

Silkworm is a kind of insect belonging to the order Lepidoptera. After peeling off their skin four times, the larva of silkworm would eject silk from mouth and fix it on the ground before put up the false work, which was used as the framework of cocoons, and the project of making cocoons need two to three days. Each mature silkworm has a pair of silk gland which consists of more than 900 gland cells.

At first, the silk protein which was secreted by the silk gland was liquid, and then hardens to silk fiber as soon as it exposes to air from the silk tube.

The silk fiber consist of inside and outside organizations–fibroin (about 75%）and sericin ( about 25%).

The fibroin itself still possesses 35% interval from the volume and the sericin outside also has the Amino Acids that is a hydrophil lateral chain, which make silk has a great function of absorption of moisture and still keep its comfort and coolness in spite of torridness.

Silk fiber can bear 35-44Kg/cm² pulling force in a unit of cross-sectional area and it can still restitute after elongating the 1/7 length of itself, which has excellent flexibility and is light, soft and fluffy.

Silk protein’s hair-caring function depends on the absorbency, absorptivity, film-forming ability and moisturizing type it received by hair. Compared with other protolysates (collagen, bone collagen, glutin and so on), the biggest feature of fibroin is that it is easy to be absorbed by the hair.

Silk protein contains 18 types of amino acid, over 90 percent of which can be absorbed by human body. Its percentage of amino acids which are necessary to human body reaches more than 17 percent, higher than normal food. Therefore, it is a very good way of amino acid supplements to add the fibroin into the food. Japan began the research of turning silk into food as early as 1983. Like silk cake, biscuits, noodles, soba noodles, jelly glues, ice cream, candies, porridge, drink, soy and other kinds which contain components of silk, such as mushroom, tea, capsule, tablets and so on, they have appeared in the market, and are very popular among customers, which become the new generation of healthy food and nourishment in Japan.

Tizan enjoys long term relationships with our clients because we focus on customer service and providing great products. If you are interested in Natural Silk Powder (Silk Fibroin Powder), we are flexible with the customization of orders to suit your specific need and our quick lead time on orders guarantees you’ll have great tasting our products on-time.

We also focus on value-added services. We are available for service questions and information to support your business.

Tizan specialize in Natural Silk Powder Silk Fibroin Powder for several years, we supply products with competitive price, and our product is of the highest quality and undergoes strict, independent testing to ensure that it is safe for consumption around the world.

Just send email to [email protected], or submit your requirement in bottom form, we are of service at any time